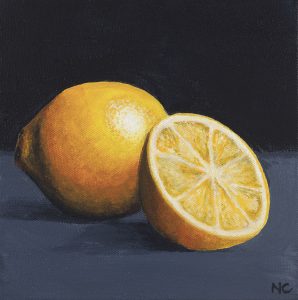 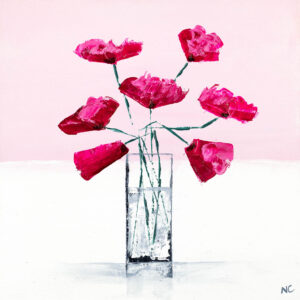 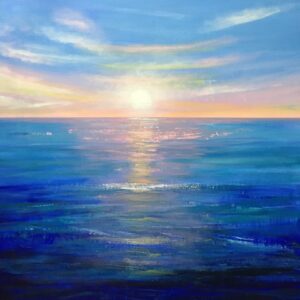 Nancy Chambers began exhibiting her contemporary, colourful paintings in 2019 and her first year brought her in to contact with a Hollywood legend as well as exhibiting alongside 5 Turner Prize winners.

In 2020 Nancy was invited to exhibit alongside some of the UK’s most accomplished artists including Antony Gormley, Grayson Perry and Maggie Hamling as part of the RWA’s Secret Postcard Auction

​”I aim to capture an essence rather than a literal interpretation of each subject. With a dandelion, for instance, I make my own

palette knives and paint with needles to capture their distinctive petals.”

Nancy is also known for her interpretative seascapes, landscapes and abstract works, usually working is acrylics but with some collage and mixed media. The common thread in her subject matter is a love of nature inspired by frequent trips around south west England.

Nancy began her artistic endeavour at an early age, but academic studies took over and she worked in the charity sector for 30 years before deciding to devote more time to painting.

Despite only beginning to exhibit in June 2019, her paintings have received wide appreciation and now hang in homes and offices as far afield as New York, Jerusalem and Australia.